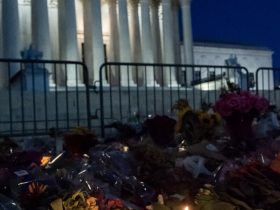 The death of Ruth Bader Ginsberg: an American crusader

Kamala Harris is receiving praise for becoming the first-ever woman to be vice president, while this is an accomplishment that deserves to be celebrated, there is an obligation to hold her accountable for her negligent actions. Glorifying Harris is inappropriate and ineffective, people and politicians should not be placed on a pedestal, this prevents pivotal progress from occurring. Having a woman in such a high position of power is inspiring but Kamala Harris is not without faults, this needs to be kept in mind as the United States progresses and accepts her as the new Vice President.

Kamala Harris is responsible for directly negatively impacting the lives of various already endangered minority groups specifically people who are transgender and incarcerated, an unfortunate combination to say the least. In 2015 as California’s attorney general, Harris defended the state of California’s decision to deny a necessary surgery for a transgender woman Michelle Norsworthy, who was forced to remain within a male populated prison. People who are transgender experience gender dysphoria, this condition has been linked to severe depression and anxiety that has detrimental effects on a transgender person’s daily life and emotions. In addition to forcing Michelle Norsworthy to remain in a gender dysphoric state by denying her of a pivotal surgery in her transition, Harris sought to further damage her, as author Strangio of Out op-ed explains, “…Harris’s leadership not only defended the denial of care in court in the face of Ms. Norsworthy’s escalating distress and suicidality but then continued to appeal decisions in her favor.” Harris committed to various other acts to invalidate the plea of Michelle Norsworthy. As author Sanders explains, in April 2015 a Federal District Court Judge ruled that Harris’s actions of denying care violated “[Norsworthy’s] rights to adequate medical treatment under the Eighth Amendment to the U.S. Constitution, which forbids cruel and unusual punishment. The historic ruling resulted in the California Department of Corrections and Rehabilitation being ordered to provide Norsworthy with ‘adequate medical care, including sex reassignment surgery… as promptly as possible,’ as the court stated at the time.”

Kamala Harris also was responsible for the incarceration of several people solely on the basis of possession of marijuana which is highly questionable considering the state of California’s now legalization of the recreational use of the drug. Additionally, when Harris was asked if she had ever used the drug herself, she lacked a coherent response and reacted inappropriately to the question posed by laughing, a disturbing amount of hypocrisy is present in regards to Harris and her past prosecution of those in possession of marijuana considering that Harris could not say for herself that she has abstained from the drug. Justice needs to be served for those incarcerated on marijuana charges.

Overall Harris has her fair share of flaws in addition to her positive attributes and contributions throughout her life, this is crucial to keep in mind as power transitions. Remain hopeful for Harris but do not remain ignorant.